As Gaming Verdict’s resident battle royale and third-person fast-action game player, it didn’t take much to convince me to play Naraka: Bladepoint, the newest title from NetEase and 24 Entertainment.

Much of the game design is as it was first established in the genre-defining PlayerUnknown’s Battlegrounds, with a storm that is constantly trying to kill everyone. The ever-shrinking vortex thus forces players into clashes with one another; and the scramble for early game loot that can quickly decide how things will go if there’s only one sword in the area and some stranger manages to grab it.

There are MOBA elements that make each of the seven characters feel visually and mechanically distinct, though I wonder if the item-based character buff system is more than a little bit text and menu heavy. There are a lot of items that do a lot of game-changing things, but I found people swinging swords wildly at my head most times I tried to put in any effort to read any of it. This issue could of course go away with time, when I get a better idea of what things do. 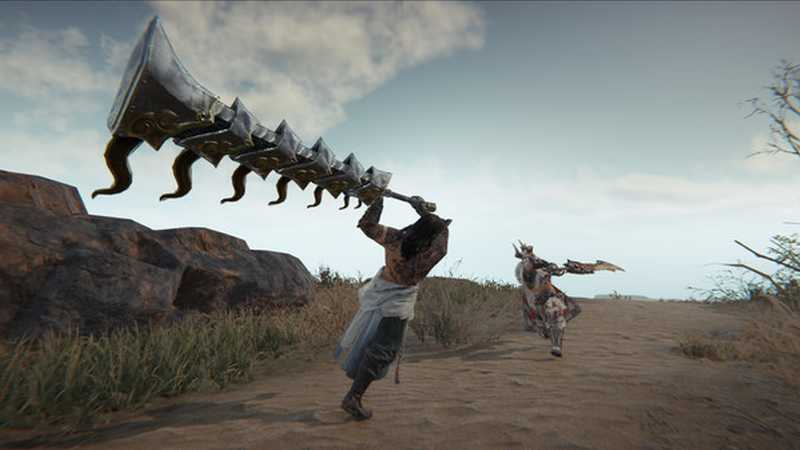 On a mouse and keyboard, the controls  very much remind me of the little-remembered 2003 online game GunZ: The Duel, and it’s similar focus on parkour traversal that has only been improved by design advancements made in that space by Naughty Dog’s Uncharted and Ubisoft’s Assassin’s Creed.

Naraka: Bladepoint also swipes the weapon repair system from Monster Hunter, which we’re not sure helps the game’s feel, but it’s one way to make it so that melee focused players have to ‘reload’ their swords like the gun users, I suppose. The gameplay is not exactly unique, but it is undoubtedly fast paced and fun to play.

Sadly, what most lets Naraka: Bladepoint down is it’s aggressive monetization and it’s general lack of respect for the player’s intelligence. It’s all based around cosmetic items, so the game isn’t pay-to-win, but it is predatory all the same. In my few hours with the game —which currently costs money, just so that everyone is on the same page— I have been presented with two different currencies that make the Naraka Bladepoint economy hard to grasp. There are loot boxes that don’t disclose the odds but say they give you better chances of getting cool stuff if you open 10 of them at once, and purchasable character outfits and weapon skins that are honestly just existing designs with the texture colours swapped.

On top of all that is the battle pass. Unlike those of big competitors Fortnite, Call of Duty: Warzone and Apex Legends, it doesn’t seem to give you enough currency rewards to buy the next one without spending money again. NetEase is trying everything to get your cash and the result is unpleasant and overwhelming.

It’s attitude towards the player is most exemplified by the pop-up that tries to stop you from closing the application and only provides a tick box to not come up again for the rest of the day, rather than opt out of seeing it entirely. It’s like a fun, but kind of pushy friend — the kind that you eventually stop talking to because they’re just a bit exhausting to deal with.

I’ll be sticking with it a bit longer, believing that with time I may start to understand and appreciate the game’s systems a bit more. I’ll also be hoping that NetEase removes some of the more egregious aspects of the monetization and pressure put on players in a future update, but that feels unlikely at this point. If my Naraka: Bladepoint impressions change, I’ll let you know.

If you’re still interested in Naraka: Bladepoint, why not take a look at our guide to all of the heroes in the game?

Vince Pavey
Vince Pavey is a writer from the North-East of England that has worked on comics for The Beano and Doctor Who. He likes to play video games and eat good food. Sometimes he does both at the same time, but he probably shouldn't.
View more articles
Share
Tweet
Reddit
Email