The Razer Basilisk, described by the guys at Razer as ‘The worlds most advanced FPS gaming mouse’ goes under the Gaming Verdict spotlight today to see whether it lives up to claims. Razer has said the Basilisk has the most advanced optical sensor in the world and has been equipped with features such as a custom resistance dial for the scroll wheel, a DPI clutch button with 3 attachments and a new ergonomic thumb seat for accuracy. All sounds very impressive, but we’ll leave no stone unturned when finding out whether this truly is one of the greats of the FPS gaming world.

Razer has designed the Basilisk specifically with FPS (First Person Shooter) gaming in mind and what we have here is another brilliant, high-performance gaming mouse. The Basilisk uses an optical sensor with a max DPI of 16,000, it’s capable of tracking up to 450 inches per second and hosts 1000hz Polling. The 2 mouse switches are Co-developed Omron Mechanical switches with a rating of up to 50 million clicks which is right up there as far as life span is concerned. One of the more notable differences between the Basilisk and other mice in the Razer range is it’s weight, 107g, which has subsequently split the consumer market down the middle. Time to find out whether it stands up to the test.

What’s In the Box

Razer never really stray when it comes to box design and there is nothing new to report here. Crisp matte black outlined with bright neon green is the norm when describing the exterior of any Razer mouse product. Inside you will find the Basilisk sitting inside a plastic case with its 2.1m braided cable tied neatly behind in its own protective housing. The cable is identical to both Deathadder Elite and Lancehead cables, which once un-boxed do stay kinked for a while but eventually straighten out. Something I have found to be a little annoying in the past. Alongside the standard welcome letter, user manual and stickers you’ll also find 2 additional removal clutch buttons that vary in size to accommodate all users.

Once opened you will find: 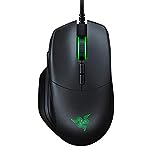 The Basilisk is slightly wider than most Razer mice and you can thank the addition thumb ‘grip’, as I like to call it, for this stat. However, this being said the actual core body of the Basilisk is much smaller than its dimensions would suggest. The newly designed thumb rest Razer have implemented creates a much better ergonomic feel when using the mouse in both gaming sessions and everyday use which is something they have worked on to open up their demographic market. It’s worth mentioning that the overall profile of the mouse when looking at it head-on has an accentuated right/left downwards slant which would give you the initial impression of awkwardness and discomfort, which to my surprise wasn’t the case. The M1 button has been designed with a concave finish, creating a perfect grip when gaming, the M2 button then slopes off slightly to the right making the overall feel of the mouse very pleasing.

The weight, as stated above is 107 grams, which to some may be considered slightly heavy. However for FPS gaming I found this advantageous as the mouse almost hunkers down onto the mouse mat giving you much more control and accuracy, especially when sniping and in long range situations. There’s nothing worse than not being able to make minute adjustments, precisely, when in the an intense battle situation and this mouse certainly doesn’t have that issue. The Basilisk has a large footprint which Razer have said increases accuracy and after various tests, I can confirm this definitely feels like the case. The mouse has 3 decent sized plastic skates with two being positioned at the front and rear of the mouse, leaving the third under the thumb rest. For me the mouse feels great on the mat and glides effortlessly with little resistance. If you’re like me you will definitely appreciate this!

Razer is no stranger to producing Fantastic looking mice and the Basilisk is absolutely no different. A lush matte black high-quality plastic shell sits inside 2 perfectly designed rubber grips which have been designed to promote stability in the hand. It has a moderate arch leading down towards two quality feeling primary mouse buttons, left being concave for comfort and right slightly sloped giving a sleek, floor-less look. With all Razer mice, its RGB makes this mouse look fantastic from all angles and is 100% customizable. In total this mouse has 8 buttons which sit nicely within their housing. I particularly enjoy the resistance on the mouse buttons as they are neither too hard or soft to press, which is something the designers have worked on to optimize usage.

The overall feel of this mouse is highly desirable, especially for long gaming sessions as it sits in the hand so perfectly. After the success of the Mamba Elite, Razer has stuck to a fairly similar blueprint when designing their mice and the Basilisk certainly sits highly on the ergonomic design list. This being said, some of the team have mentioned that their 4th finger drags along the mat and after several hours becomes uncomfortable but I never experienced this. With its large footprint and hunkered down feel you get the feeling of being in complete control of your crosshair which in turn helps to increase accuracy.

Razer has designed the Basilisk with FPS gaming in mind and with the impressive co-developed Omron Switches, which have a life span of 50 million clicks, gives users confidence in durability and longevity. The primary mouse buttons are separated from the main shell which creates a wonderful “click feel” when gaming. We tested the resistance when pressing both M1 and M2 towards the base and found that it was very similar, if not exactly the same as clicking in a normal position. Perfect for users with slightly smaller hands. Something worth noting is that the 2 side buttons, not including the optional Clutch button, are positioned in such a way that means they are sat out of the main body slightly. In some cases, this has been an issue because in certain situations they can be clicked unintentionally.  However, with the new thumb housing that Razer has given the Basilisk, this isn’t a problem at all. Your thumb sits underneath the 2 buttons in a way that makes it almost impossible to press accidentally but is still accessible if binding is your thing.

Like all Razer mice, the scroll wheel feels great and its resistance is customisable with a dial found on the base of the mouse which ranges from completely free-flowing to fairly pressured steps, very versatile for users wanting to quickly scroll through weapons and bunnyhop to those that would rather not use the wheel at all. As you would expect, found just behind the wheel are the 2 mandatory DPI buttons, used loosely for people sniping in various games to quickly change sensitivity to aid in stability and accuracy. However, the Basilisk comes equipped with a sniper button specifically designed to quickly drop to the lowest DPI possible, meaning you can rebind the DPI buttons to something more useful.

Being a huge gamer, especially FPS games such as PubG and CSGO, I very much enjoyed the idea of having time to test the Basilisk to its full potential. As with all new Razer mice, the Optical sensor performed to the highest level, precise tracking and fantastic response time is a staple of the ever popular PMW3389 highly considered to be one of the best sensors available. The Sleek design paired with the matte finish and vibrant RGB work in perfect harmony to create a fantastic looking mouse to eliminate opponents at will.

Two areas that I think are particularly noteworthy are; the fantastic new ergonomic thumb seat, and the weight. For me personally I’ve always enjoyed a mouse with a bit of weight (107g) as it seems to level out the entire feel and idea of aiming. The weight, plus the Basilisk’s large footprint combine perfectly to give gamer’s the ultimate hand feel when aiming and after testing I noticed my accuracy in long-range battles was much more acute and precise in comparison to when using smaller mice such as the Steelseries Rival 310. However many consider the weight to be higher than what they feel comfortable using for extended periods of time. I’ve used this mouse exclusively for the past week and have never thought of it as a heavyweight, I suppose it all comes down to personal preference. The ergonomic right-hand design which includes the brilliant thumb rest is perfect for creating a tight fit in the hand, it almost subconsciously takes away the thought of grip because it feels so natural in the hand.

The Basilisk has been equipped with a 2.1m Braided cable identical to that of the DE and Leatherhead. Unfortunately there is no Wireless version of this mouse, however, if you want a decent comparable then I’d recommend checking out our Mamba Wireless review.

The Basilisk uses Razer Synapse 3 which in recent times has been described as slow and unresponsive, however, Razer has taken this on board and the latest version of Synapse 3 is looking much more user-friendly and polished. With this, its worth mentioning that the Basilisk actually forces consumers to use the software upon first buying the mouse. Annoying, but, with the Basilisk’s on board Profile and cloud storage you only have to go through the process of using the software once. Simply create your desired profiles then set the software to not open on startup. I think it’s worth mentioning that there is a unique hyper shift feature which allows you to bind a button to quickly switch between profiles, so in theory, you could have 16 binds going simultaneously. Very cool.

If you are interested in learning more then feel free to read our Razer Synapse Gaming Software guide right here.

So, does the Basilisk live up to the hype that Razer created? How does it compare to other similarly priced mice on the market today? Well, we really enjoyed using the Basilisk with its fantastic optical sensor, brilliant ergonomics which aid in extended gaming sessions and totally customisable settings right down to how resistant you would like your scroll wheel to be. Its an all round very desirable mouse and for under £60/$70 puts it right up there as far as affordable mice are concerned. The main feature of this mouse is the thumb rest and it really didn’t disappoint in creating a fantastic ergonomic grip. It actually reduces the stress being put on the users hand which can only promote extended usage. However, with many of the top gaming mice on the market at the moment being under 100g I would seriously consider whether or not the Basilisk’s hefty weight band is something that you’d feel comfortable using. For me, it was absolutely not a problem but other members here at GV prefer something more lightweight like the Logitech G Pro Wireless. This being said we can all safely say the guys over at Razer have not disappointed and have achieved their goal in creating an extremely solid gaming mouse which covers all bases.