The Logitech G433 fits in a very appealing price bracket for the average gamer – at around $80 – $100 USD on Amazon (at the time of writing), it offers enticing features such as 7.1 Virtual Surround without a jaw-dropping price. We expected it to keep itself a notch above the dime-a-dozen budget headsets in terms of performance as well, and it has delivered on almost every count. An extra bonus includes its understated, plain look – music lovers needn’t be embarrassed wearing this set of cans in public. 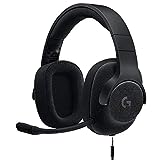 The G433 is a solid set of headphones and feels premium with nice materials just like the rest of Logitech’s audio line-up. The cloth covering on the earcups initially attracted concerns from us as to their long-term durability and tear-resistance, but have held up well during the two-month long testing time, in which we tossed the headset in bags, used it extensively for gaming as well as for music listening on public transport.

The headband is mostly made out of polycarbonate plastic, with a stainless steel band inside for structural support. This setup feels solid, resistant to flex damage and is lightweight. There is cloth padding at the top of the band for comfort – whilst I am personally okay with this, some people do prefer suspended headbands so keep this in mind if you are selecting a headset for the first time. The clamping force of the headset was slightly too high for my comfort, although someone with a different shaped head might feel differently (my friend, on the other hand, found the snug fit better than other headsets I had on hand).

The cloth covering on the earcups is a nice touch – a quirky breath of fresh air compared to the deluge of matte black plastic gaming headsets normally tout. The G433 also comes in a variety of colours to match any setup or taste, which is another refreshing contrast to the “edgily” styled competing products. Logitech’s inclusion of a shorter, rubber “mobile” cable furthers this headset’s potential for public use as well as gaming

You also get a choice of micro-suede or cloth earcups – both are slightly too stiff though and don’t feel as comfortable as they should. They did get softer after about a month though, but by then my aftermarket leather cups had arrived in the mail. One frustrating problem I did encounter with the earcups was the proprietary “double-lip” design; while it does keep the earcups securely on the headset, it made changing them a major pain. After a few tries I got the hang of it, but I wish Logitech could’ve made switching them a little more intuitive considering how uncomfortable the default cups were.

Gaming headsets in general place convenience over quality, and as a result I prefer to use my trusty set of Audio Technica headphones and an Antlion Modmic for gaming. The G433 costs less than half as much as my current setup, and for the price, it sounds pretty good.

In game, directional audio was excellent, especially with DTS Surround Sound enabled in Logitech Gaming Software. Pinpointing the direction footsteps, reloading sounds and even grenades bouncing in games such as CS:GO and Rainbow 6 Siege was easy, and for gamers who are looking for the edge in audio over opponents, I can happily recommend the G433. However, with the surround on, audio sounded more tinny and the mid-range became slightly distorted – not recommended for music.

In listening to music, bass sounding punchy and the mids were nice and clear. The highs became ever-so-slightly distorted, especially in electronica and lyrics ending with “s”. Logitech does offer a few default sound profiles and EQ adjustment, so fiddling around with those could solve some of the issues if it bothers you. Overall, the G433 does the job and doesn’t sound too bad either.

Being a closed-back headset, I was expecting good seals from both outside noise and leakage. While it is nowhere near as leaky as open-backed cans, at louder volumes the sound can be heard from the outside, especially with the default, stiff earcups (the leakage lowered dramatically with my aftermarket leather pads). External noise cancellation also could’ve been better, especially during testing on public transport. However, if you are only using them for gaming, they can easily block the sound of your gaming PC’s fans.

The microphone is pretty good and blocks background noise well. The lack of a foam covering makes any airflow loud and noisy, so I would recommend getting a cheap one on eBay if you care about mic quality. I’m nitpicking here though – this is a gaming headset, and for communication in CSGO and other multiplayer games though, it is perfectly adequate. Speech was clear and balanced in volume (you can tweak this in software), albeit rather tinny like most headset mics.

The G433 is balanced in price, value and performance. It gives excellent positional audio for gaming in addition to a clear-sounding mic as well as decent sound for music lovers. We loved its understated design and enjoyed the refreshing choice of colours and materials. The headset was let down slightly by the uncomfortable earcups, but it’s a small flaw compared to everything else Logitech gets right.