Note: This review is part of our best budget gaming mouse series. For details on competing products and how we tested them click here.

What’s in the box section

When it comes to packaging and extras, don’t expect much from a $30 gaming mouse. The Logitech G203 comes in a sleek and simple box, reflective of its own design.

Inside the box, you will find the G203 mouse, quick start guide, user manual and that’s about it. 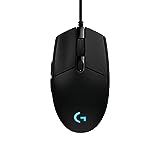 Logitech G203
The Logitech G203 is a more affordable version than the G Pro wired, with a slightly thinner, more flexible cable and mercury sensor.
$20.99
Buy on Amazon

I have seen many complaints about the shape of the G203 and mice using the same shell, and most revolve around the sides. Before we get to that, however, let’s take a quick tour of the shell. The height is 38mm, with a maximum width of 62mm and a length of 116mm. This makes it a small mouse, quite a bit smaller than the Talentech Ember that we reviewed before. It is also (technically) an ambidextrous mouse, meaning that the left and right sides are identical and the mouse is mirrored from side to side. I say technically ambidextrous, because there are 2 side buttons only on the left side, making this mouse more suitable for right-handed users.

As noted above, the mouse is quite small and generally suited for smaller hand sizes. However, if you’re a gamer who needs XXL gloves, this mouse can still be great. I have large hands, generally much too large for this mouse, but it feels extremely comfortable for my semi-aggressive claw grip. Fingertip users would also enjoy this mouse, as its size would suit their grip well, but palm users should have very small hands to properly utilize this mouse.

As mentioned above, the mouse has generated a bit of controversy on Reddit regarding the shape of its sides. The mouse it was based on, the G100/100s, the sides were straight, and slightly slanted in towards the bottom, like this: \___/. The G203, on the other hand, is much more rounded in shape, closer to: (__). Some former G100 users have complained about this, so be aware of it if you are coming from that mouse. I personally did not have any issues with the sides or maintaining grip at all, but your mileage may vary.

The G203 clocks in at a feather-light 85 grams, 15 grams lighter than the Talentech Ember and one of the lighter mice available. This makes lower-sensitivity gaming easier, as the lower weight will reduce fatigue during long gaming sessions.

The buttons are another slight issue with the G203. They are very tactile and EXTREMELY light. By extremely light, I mean that occasionally, if I put my mouse down too hard, either right or left click will go off. It is fairly rare and definitely easy to work around, but definitely something to be aware of. Other than that, they are very crisp and tactile, and extremely pleasant to use. The scroll wheel is fairly standard Logitech, which means that it is somewhat tactile while remaining quiet and smooth. Center click is similar, much lighter than most but not easy to use accidentally. The side buttons are probably the worst buttons on the mouse in terms of clicks. They have little pretravel and are extremely well-placed, but are loud and have a slightly annoying pinging sound upon activation. The DPI button is centrally placed, and out of the way enough that accidentally clicking it is not easy to do at all.

The cable is quite nice, but not newsworthy. It is flexible, but still somewhat noticeable during long and fast swipes. It is much better than the cable on its big brother, the G Pro, so it does get a point in its favor for me.

Now that it has been mentioned, we should compare the G Pro and the G203. The two mice are functionally identical, with 3 major differences. The G Pro has a 3360 and a thick, stiff braided cable, and costs $45 dollars. So there is an extremely slight and barely noticeable upgrade in the sensor department, the cable becomes noticeably stiffer and worse, and the mouse receives a 50% markup. Thus, it is not surprising that many pros opt for the G203 instead of the G Pro.

The Mercury sensor on the G203 is not an option seen on any other mouse, as far as I am aware, and was designed in-house by Logitech to be a cheaper alternative to other budget sensors. What is ironic is that going by pure statistics, the Mercury sensor is NOT a budget performer at all. In fact, its main statistics are only slightly less than the top-of-the-line 3360, and its in-game feel is just as equal. I can personally tell no difference between the PMW3360 and the Mercury, and given the G203’s popularity among both casual and professional gamers, it seems that many others cannot as well.

The software I used is the Logitech Gaming Software, although the Logitech G Hub also works with the G203. It is a clean, intuitive software, and does not take much processing power like some software can. Most importantly, the G203 comes with onboard memory, meaning that the software can be installed, custom lights and bindings set and then uninstalled and the mouse will continue to function properly. Speaking of lights, the G203 has an illuminated logo on the back, with a loop of light following the contours of the shell in the back. It has full 16.8 million color options, along with breathing and color cycle options. The lights can also be turned off if they bother you.

You can read our Logitech Gaming Software guide right here.

The performance of the mouse is honestly pretty incredible to me. The weight, shape, and sensor all combine to create a sleek, efficient, and ultimately beautiful mouse, suitable to most hand sizes and grips. The sensor is on par with the top sensors on the market today and performs flawlessly in games, even intense, sweaty matches. It will suffer a bit in some MMO and RPG games that require more buttons on the side, but it is an excellent budget option for competitive FPS games.

I found no button latency, with basically identical results in the HumanBenchmark click test vs the Nixeus Revel. The lift-off distance is extremely low, tracking at less than one DVD in height. (In contrast, most mice are somewhere between 1 and 2 DVDs.) The light buttons can be an issue, but it does not take long to train yourself to be careful of the weight you put on the buttons. The actual DPI is spot-on with the listed DPI, which is better than could be said for most mice.

To be entirely honest, it is hard to find things wrong with this mouse. It is extremely solid, lightweight, with an excellent sensor, all wrapped up in a cheap package that frankly should be more expensive for what it is.  It comes with the Logitech software and quality assurance, which are excellent, and ticks most if not all boxes for most game types. I rate this mouse at 9.8 out of 10, only held back by the super sensitive button issue.

Logitech G203
The Logitech G203 is a more affordable version than the G Pro wired, with a slightly thinner, more flexible cable and mercury sensor.
$20.99
Buy on Amazon